Partnering with the best (Our financing story, part 2)

So, we had the news about our loans being approved, and we’d made it pretty far along our financing road. But this wasn’t the end: we had to bring in some great people who believed in us and what we were doing, and wanted to be a part of something special.

Before we even approached the bank, back in late summer 2013 we had put an ad in the paper asking Uxbridge people to tell us how they liked their beer. This was an important step for us — we needed to know there were enough people in town willing to buy the kind of beer we want to make. (The answer was a resounding yes!) Along with the survey respondents we also heard from local guy Howard Emer who wanted to know how he could be involved. We got to know Howard (and his awesome wife Nathalie) well over the ensuing months, and when it came time to seek out investors, he was ready to come on board.

“Seeking out” investors is not exactly a piece of cake. We worked every connection we had, but the clincher was when we decided to write a press release for the local papers. The articles that came out said, point blank, “The Second Wedge Brewing Co. is seeking investors.”

Within a few hours of the papers coming out, we had received our first email, and by the end of the week had booked ten meetings with people who had expressed serious interest. It was a whirlwind, and several of the first meetings begat second meetings. We set a deadline and by the end had received three excellent offers… from people we admired, who admired what we were doing and also — very important! — respected the craft and culture of beer-making that we want to contribute to.

In the end, we were thrilled to bring on Bob and John Somers. Around the table with us now are a retired luxury homebuilder who knows his construction inside and out, and the principals of Fitzpatrick Electrical (aka Fitze), a large, successful electrical contracting company. All this expertise is coming in handy as we prepare to transform our building.

And all three conduct their business right here in Uxbridge, so our whole team is local proud. 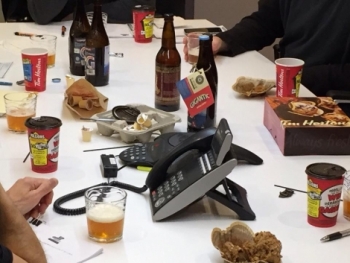